I’m excited to announce a new guest post by Veronica Scott. Thanks, Veronica for sharing your insight in this wonderful article!

I’m honored to be one of your first science fiction romance guest authors! Thanks for inviting me to stop by and talk about writing. I pondered what might be a good topic for today and I decided to go with three things, as in “Three Things about my journey to publication, three things I wish I’d known before I was published and three things I offer as advice to new authors (or anyone really). Plus three random factoids about me!

Before I talk about my latest book, one final piece of advice – indie publishing is very much a business so try to adopt that mindset going in and you’ll do fine. 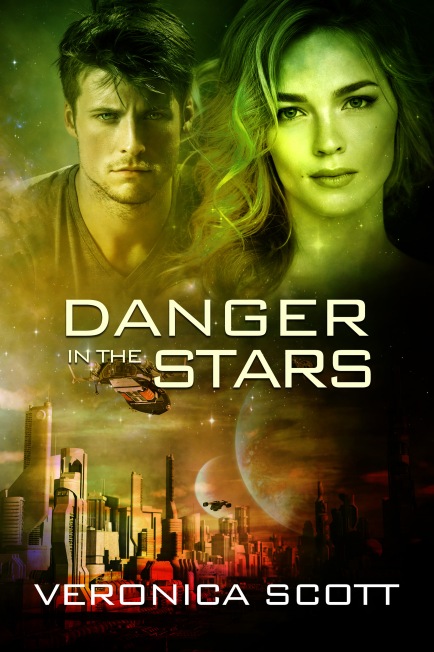 Danger in the Stars is my current new release. The story:

Miriell, a powerful empathic priestess, has been kidnapped from her own primitive planet along with a number of her people, and sold to the evil Amarotu Combine, largest organized crime syndicate in the Sectors. When she and her handler are sent to use her power to commit an assassination, she must leave behind her own sister as hostage to ensure her compliance. Miriell cannot ask for aid without endangering herself and others.

Despite his best efforts, Combine enforcer Conor Stewart is entranced by Miriell, and helps her evade the worst of brutal treatment from the rest of the mob. But Conor must keep his distance, before the lovely empath learns that he has secrets of his own–secrets that could get them both killed.

The situation becomes dire when Conor and Miriell come to the attention of both the Combine overlords and the deadly Mawreg, aliens who threaten the Sectors. Can she save herself and the Mawreg’s next victims? And will Conor help her, or remain loyal to his evil bosses?

The nausea was always the worst part of emerging from cryo sleep. Miriell fought her confused thoughts and the incipient headache, trying not to throw up. She curled into a ball on her side, hands fisted on her unhappy stomach and bit her lip to avoid moaning.

A rough hand on her shoulder shook her. “Come on, you know we don’t have time for this sick act of yours. Snap out of it. The client’s waiting to see what you can do.” Jareck’s voice became more congenial, placating almost s he shifted his focus to someone else. Clearly, he was no longer speaking to her. “These performers, as my boss calls them, don’t do well with cryo sleep, but she’ll be on her feet in a minute or two, I promise. Then we can be on our way.”

“Good. The boss is getting impatient, waiting in the limo. She doesn’t spend much time in cargo warehouses.”

The new voice was deep, and although the tone was rough and the words clipped, Miriell felt as if a warm blanket had been placed over her shoulders. Intrigued by her own reaction, she forced herself to sit up on the floor, bracing herself against the cargo container that had been her prison. Blinking to focus, she turned her head, searching for the owner of the new voice.

Jareck grabbed her elbow in a bruising grip and yanked her to her feet. He must have removed the shackles while she was still unconscious. Giving her a shake, he said, “I swear, every time we travel for a job, you act as if your sweet time asleep in the cryo unit was torture.”

Maybe because for me it is. Swaying, balance still off, she couldn’t resist Jareck as he tugged her close to him, the smell of his cheap cologne another assault on her overloaded senses. Her stomach heaved, and she had to make a conscious effort not to throw up all over him, slapping her free hand over her mouth.

“Do I have to carry you?” His voice was low, and she knew it was a threat. He’d make her pay later.

With painful effort, she straightened her spine and stepped away, brushing one hand down her plain gray tunic in a vain attempt to smooth out the wrinkles. “I can walk.”

“You don’t look like it.” As their new companion voiced his opinion, she realized he was no one she’d ever met before. Tall, with broad shoulders and well-defined muscles, he had black hair and gray eyes that were almost silver. She was mesmerized by his eyes. Miriell wished she dared to engage her gifts, get a sense of this person, maybe figure out why he made her feel safe, when clearly, she was anything but.

Jareck stopped to pick up his kit bag, never releasing his hold on her. “Conor’s right, we’ve got to be going. You’re ready to behave, right?”

Submissively, she nodded, bottling up her anger and hatred. Someday I’ll get my chance and you will die.

Best Selling Science Fiction, Fantasy & Paranormal Romance author, as well as the “SciFi Encounters” columnist for the USA Today Happy Ever After blog, Veronica Scott grew up in a house with a library as its heart. Dad loved science fiction, Mom loved ancient history and Veronica thought there needed to be more romance in everything. When she ran out of books to read, she started writing her own stories.

Seven time winner of the SFR Galaxy Award, as well as a National Excellence in Romance Fiction Award, Veronica is also the proud recipient of a NASA Exceptional Service Medal relating to her former day job, not her romances! She recently was honored to read the part of Star Trek Crew Member in the audiobook production of Harlan Ellison’s “The City On the Edge of Forever.”

Piercing the Shadows of Cyberpunk

The Stones of Kaldaar Review

Hey, I'm Darlene, a nomadic writer and teacher. If you're looking for writing prompts, inspiration, and a fellow writer to commiserate with, you've come to the right place. If you're a reader looking for a fun mix of poetry, romance, science and fiction, you've found a buddy!
View all posts by Darlene Reilley →
This entry was posted in guest bloggers, How To, Romance, Science Fiction, Writers and tagged guest bloggers, how to write, science fiction, science fiction romance, Veronica Scott, writer advice. Bookmark the permalink.