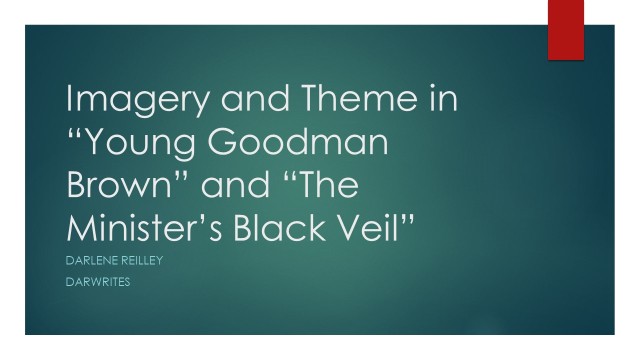 According to Nathaniel Hawthorne’s character, Young Goodman Brown, “’There is no good on earth; and sin is but a name’” (“YGB” 329). Hawthorne’s dark writing style illustrates the torment of his characters as they battle the ages-long war of good versus evil. One example from “The Minister’s Black Veil” is Reverend Hooper, who is “[k]ept in the saddest of all prisons, his own heart” (“MBV” 341). In “Young Goodman Brown,” Hawthorne leads the title character into a shadowy place where “[h]e had taken a dreary road, darkened by all the gloomiest trees of the forest, which barely stood aside to let the narrow path creep through, and closed immediately behind” (“YGB” 325). When coupled with the theme of good versus evil, Nathaniel’s Hawthorne foreboding tone illuminates mankind’s struggle against temptation; he uses vivid imagery and theme to isolate his characters and expose the vulnerability of the human condition.

Both stories deal with a man’s reaction to evil. Young Goodman Brown is an ordinary man who normally keeps the tenents of his faith, but chooses to stray for a single night of cavorting with the devil. Despite his wife’s pleas and his wishes to stay at home, Brown chooses to enter the murky woods. Brown acknowledges his “conscious of the guilty purpose” (“YGB” 328). Just as Brown’s character knows what he and others are doing in the woods, Reverend Hooper in “The Minister’s Black Veil” must deal with his sin and the hidden sins of others. Hooper tries to show the characters how they truly are—with walls between them. In the character’s final speech, Hooper refuses to take off his veil and speaks of each man as having “[o]n every visage a Black Veil” (“MBV” 342). The ebony veil is a symbol of Hooper’s sin for an act against a young woman which takes place before the story began. Although Hawthorne does not specify the act, Hooper has something to do with it because the woman he helped bury is the last soul on earth to see his face.

More than theme links these works—vivid imagery in both stories showcases Hawthorne’s mastery of language and craft. The scene in “Young Goodman Brown” where brown enters the woods solidifies this idea:

He had taken a dreary road, darkened by all the gloomiest trees of the forest,

which barely stood aside to let the narrow path creep through, and closed

immediately behind. It was all as lonely as could be; and there is this peculiarity

in such a solitude, that the traveler knows not who may be concealed by the

innumerable trunks and the thick boughs overhead; so that with lonely footsteps

he may yet be passing through an unseen multitude. (“YGB” 323)

The imagery of the darkened, desolate road is like walking into a cave. Brown feels isolated, and the solitude is reinforced by the colors Hawthorne chose to include in the story: reds, browns, and blacks. Even Young Goodman Brown’s name indicates he is boyish, simple, and brown. Contrast this against the colors when Brown is at home with his wife: white, blue, and pink (“YGB” 325). These colors stand for goodness, innocence, and purity. A new play of darkness and light continues in “The Minister’s Black Veil,” where the children have “bright faces, tript merrily” and that the maidens are pretty because of the “Sabbath sunshine” (334). Everything changes when Reverend Hooper enters the scene wearing a veil that is “[s]wathed about his forehead, and hanging down over his face, so low as to be shaken by his breath” (“MBV” 335). The description leads to a striking image of an ebony veil that forever changes Hooper’s vision of the world into shaded isolation and darkness. Later in the story, the veil is said to “deepen the gloom of his darksome chamber, and shade him from the sunshine of eternity” (“MBV” 341). Hawthorne chose to pit good against evil in more than deed; his vivid imagery shows contrast and depth.

While there are many similarities between “Young Goodman Brown” and “The Minister’s Black Veil,” there are also several differences. One such aberration is how the characters deal with their life situations after their encounters with evil. Brown isolates himself while remaining in the community; once he returns to Salem, Brown even interrupts the family prayer by “scowled and muttered to himself, and gazed sternly at his wife” (“YGB” 333). Even though he lives among them, he is not one of them. Brown cannot deal with the possibility that each person occasionally gives in to sin, and because of his ignorance, his life is an empty shell. Hawthorne writes that they “carved no hopeful verse upon his tombstone for his dying hour way gloom” (“YGB” 333).

While Brown is unable to deal with the consequences of his encounter with evil, Reverend Hooper channels his hatred for the veil and everything it signifies into helping his flock. Hawthorne writes, “[B]efore he brought them to celestial light, they had been with him behind the black veil. Its gloom . . . enabled him to sympathize with all dark affections” (“MBV” 341). Hawthorne writes that Hooper is “kind and loving, though unloved and dimly feared, a man apart from men, shunned in the health and joy, but ever summoned to their aid in mortal anguish” (“MBV” 341). Even though he helped them in their time of need, none of the characters supported Hooper because of the stigma associated with being different and out of the ordinary. They fear what they do not know or understand, and therefore isolate Hooper.

Another difference between the stories is Hawthorne’s use of symbolism. In “Young Goodman Brown,” Faith is more than just a wife—she is the embodiment of everything Brown holds dear and good in life. Faith’s pink ribbons signify purity and innocence. Virtue is important to Brown because it embodies everything the Puritan society holds dear. Even when he doesn’t give in to her cries, Faith says, “[M]ay you find all well when you come back” (“MBV” 325). While this signifies Brown’s good nature and conscience, Reverend Hooper’s main symbol, the black veil, is a dark reminder of mankind’s ability to sin. He wears it on the outside, while most of mankind hides their veil within; Hooper, while on his deathbed, refuses to take off the veil, and instead says, “When the friend shows his inmost heart to his friend, the lover to his best beloved; when man does not vainly shrink from the eye of his Creator” (“MBV” 342). Hooper sees the veil as a weary shroud of earthly sins.

When Brown is in the wood, he “had no power to retreat one step, nor to resist, even in thought . . . the blazing rock” (YGB 331). Mankind lives in controlled chaos where the wood is all around; many paths lay ahead and what one gets out of life is what one puts into it. In “The Minister’s Black Veil,” Hawthorne writes, “Even in the lawless wind, it was believed, respected his dreadful secret, and never blew aside the veil” (“MBV” 340). Even in the deepest, darkest moment of his life, Reverend Hooper saw the secret for what it was—humanity’s unquenchable desire for sin. The stories “Young Goodman Brown” and “The Minister’s Black Veil” shed light on the possibilities of the paths ahead; even when each person chooses their own way, temptation lurks behind each tree in the woods.

Every time I come back to Hawthorne, I find something new. I would recommend reading him because he’s a good writer.

If you liked this, check out my other work at my Library!

Enjoyed this? Buy my books.

Hey, I'm Darlene, a nomadic writer and teacher. If you're looking for writing prompts, inspiration, and a fellow writer to commiserate with, you've come to the right place. If you're a reader looking for a fun mix of poetry, romance, science and fiction, you've found a buddy!
View all posts by Darlene Reilley →
This entry was posted in Book Reviews, reading, Reviews, writing craft and tagged Creative Writing, Hawthorne, how to write like the masters, Nathaniel Hawthorne, write like the masters, writing craft, writing fiction. Bookmark the permalink.