The Geologist’s Viewpoint: H. P. Lovecraft’s At the Mountains of Madness 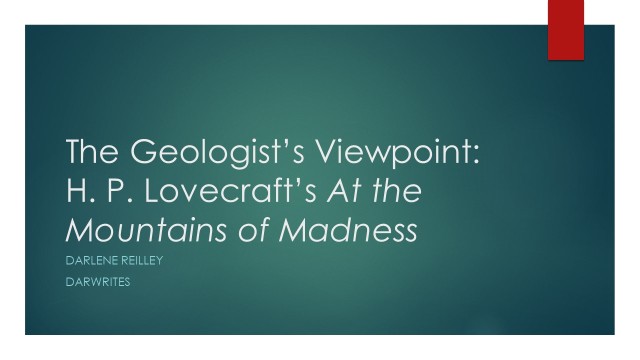 H. P. Lovecraft’s At the Mountains of Madness and Other Tales of Terror contains one novella, originally serialized, and three short horror stories. Lovecraft is both amazing and maddening—he is really smart and I can see that in his writing, but at the same time the round-about way he constructs the novella is, at times, exasperating. In his novella, “The Mountains of Madness,” Lovecraft explores Antarctica and aliens in the 1930s. This story works because it is seen from the viewpoint of the most unlikely explorer: the geologist, William Dyer.

“As a geologist, my objective in leading the Miskatonic University Expedition was wholly that of securing deep-level specimens of rock and soil from various parts of the Antarctic continent…” (2). From the beginning, we are immersed in the language of geology and the story is written in long odious paragraphs which mimic the long span of time geologists look at. As I read it, I felt like I was back in geology class (11). It took a really long time to build up to anything of importance, as is the case of rocks and world-building, but finally “culminating in the discovery of slate fragments with several markings” (11). Lovecraft repeats geologic information a lot, especially the use of words such as “pre-Cambrian slate” and “strata” and “formations” (13). He does this to get into the mindset of the geologist and reiterate the fact that we’re looking at the expedition from the lens of geology.

The phrase that impacted my solar plexus was “Am sending to camp for electric torches. Will extend search area underground by hacking away stalactites” (19). One dirty little secret of science is that methodology hasn’t always been so careful. In the 1920s-40s a vast swath of scientists and anthropologists did similar, stumbling into areas and not writing down everything of detail for future researchers, but actually just busted up the rocks. This is important to the story because it adds an air of shock to those readers who weren’t aware of it and a dose of reality to the readers who were aware of it.

The story is told from Dyer’s viewpoint, and through it we learn more about the rocks of the pre-Cambrian than any other voice could have told on the mission.

The effect was that of a Cyclopean city of no architecture known to man or to human imagination, with vast aggregations of night-black masonry embodying monstrous perversions of geometrical laws. There were truncated cones, sometimes terraced or fluted, surmounted by tall cylindrical shafts here and there bulbously enlarged and often capped with tiers of thinnish scalloped disks; and strange beetling, table-like constructions suggesting piles of multitudinous rectangular slabs or circular plates or five-pointed stars with each one overlapping the one beneath it. (31)

Lovecraft chose the point of view of the geologist because it is the last one anyone who is connecting with another species would think of. He took a practical, down-to-earth professor and dropped him into a horror story with the “Elder Ones” (26). The multitude of geologic terms from volcanic to “table-like constructions” gives the tale an air of authority (31).

One of the things I want to accomplish with my novel is to do what Lovecraft did—drop the person least likely to survive into a world where anything can happen, even something horrific. By reading this story, I realize that I need to amp up the depth of the character in my novel. Lovecraft inhabited Dyer when he was writing this novella—he immersed himself in the story so deeply, he talked the talk of a geologist and did not waiver from it once. I want a similar feel to my story, only with an anthropologist instead of a geologist. In several parts of his short story, Lovecraft repeated himself. At first I thought it was to hammer down the fact that Dyer is a geologist, but now I realize that it also is a way of getting at the aliens from every angle like a multifaceted rock—he meant to do that as a character quirk.

I rate At the Mountains of Madness at 3 stars.

Lovecraft, H. P. At the Mountains of Madness and Other Tales of Terror. New York: Del Ray,

Enjoyed this? Buy my books.

Hey, I'm Darlene, a nomadic writer and teacher. If you're looking for writing prompts, inspiration, and a fellow writer to commiserate with, you've come to the right place. If you're a reader looking for a fun mix of poetry, romance, science and fiction, you've found a buddy!
View all posts by Darlene Reilley →
This entry was posted in Adventure, Book Reviews, Reviews, writing craft and tagged At the Mountains of Madness, book review, H. P. Lovecraft, how to read like a writer, Mountains of Madness, read like a writer. Bookmark the permalink.

1 Response to The Geologist’s Viewpoint: H. P. Lovecraft’s At the Mountains of Madness